Space Cadet was part of a bigger series as seen on Wikipedia, which probably explains the hidden table selection, it was a remainder from the "Full Tilt!". The one included in Windows (starting with the "expansion pack" Win95 plus), is made to be more easily portable. Ailure 11:30, 16 October 2010 (EDT)

I actually have that pack around here somewhere, but I kinda lost it... There was a selection screen, and if I remember correctly it looked like the outside of some carnival tents. You didn't have to use it to start a table though, as each one had its own executable. -- Krutomisi 14:09, 17 October 2010 (EDT)

[1] This says that some of the keys do different stuff than what we have written. Either one of the sites is wrong, or there are 2 versions of the game. I can't check, (Windows 7 and all), but if you edit the page, include that "end hidden test" closes debug mode, as that one is more than likely true. {EspyoT} 17:46, 16 October 2011 (EDT)

In the program files from the windows xp version, it shows a file named "PINBALL2.MID" trying to play it gives me a "cannot play file" error message in windows media player, but "PINBALL.MID" (which is the music from the game) plays fine. I don't really know anything more about it, but I'm just going to point this out. a file with the same name exists in all the prototype versions, and they all give off the "cannot play file" error.

pinball2.mid may have a corrupt header or it has to opened in another program. Try to open it in a hex editor to see what's making it not work. Microsoft even acknowledged this file's existence. --From: divingkataetheweirdo 17:43, 31 December 2012 (EST)

I don't really know how to tell what's causing it not to work, or even how to use a hex editor. Sorry.

Hi, is there any interest in getting the debugging window up and running? 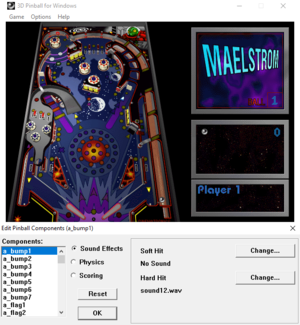 It does work in maelstrom (I think it is the prototype). Maybe i can port its functionality into the final game?!

Open up Resource Hacker, and MENU_1 : 1033. Add a menu item next to the player controls, and enter this.

Funny you should mention that: only the other day I did just that and recorded a YouTube video demonstrating it. Can this video be used in the article? AdamP (talk) 19:36, 17 February 2018 (EST)