Is all of it based on the prototype draft or just the ending? The punctuation would suggest the former but there's no way for me to confirm it. --Rotta (talk) 07:24, 14 March 2016 (EDT)

It's really IS. There is some places with fake stone objects, they have the same as normal stone appearing when using as part of background tiles, after kicking it should fly as bomb sprite wich is replaced by some other sprite graphics, then explode. Some of handling routines seems incomplete, explode remnants don't disappear when collide with level floor, but disappear when collide with other stones. 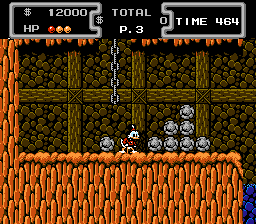 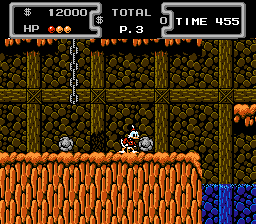 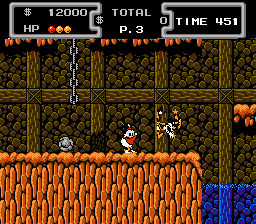 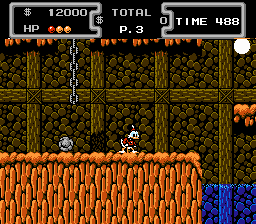 Actually, I'm not sure how I must insert this info in article... Someone couldl help )

Uh...how do you know this was supposed to be a bomb, and not just a glitch? Does the game run special routines when these blocks are hit or something? I'd like a little evidence before we go making these claims on the main page. --BMF54123 05:36, 3 May 2010 (EDT)

Actually there is no special routines, just different map index for this fake stone tile and different sprite data. This is definitely not a glitch, but some different map object with it's own sprite and animation data. I'm sure there was some kind of graphics set for something flying after kicking. Maybe this was a bomb, according to "explosion" animation at the end of movement phase. Object itself has three animation phases: first one is very short, appears just after ckick, second one appears immediately after kick and remain the same while flying, thrid one is white "explosion" circle. Seems there is no sprite remove code at end of animation sequence, thrid phase remains on screen permanently...

I'm sure, there was some different object that can be kicked and used as weapon, but since stones itself doing the same functions, it was "optimized" some kind, sprite graphics was replaced by something much useful. ;) There is at least another one fake stone at Amazon level underground, and proto version have this thing glitched too.

Maybe you right, and this wasn't bomb at all, bomb tile 2x2 sprites, this glitched one 4x4 with two phases, there is definitely lack of tiles for this animation along with bomb tiles... But this one thing good enough to another section. ;) 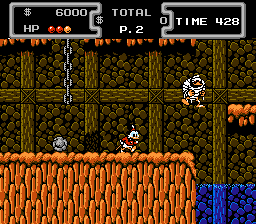 Somehow entity index 0x9C assigned with one of "duck-zombie" animation frame. Normal rocks have 0x1C entity indes, but actually there is not simple bit triggering.--CaH4e3 16:26, 3 May 2010 (EDT) It's not hard, just see history log lol

The ending really isn't that difficult to get. It can be done easily on an emulator, and with practice, on the console. You need to complete all 5 levels, collecting no money at all. You can collect ice cream for health though. For each boss, kill it and wait until at least 9 seconds are remaining on the clock before collecting it. Anything above 9 will add money to your total when you get it. All the treasures from all 5 levels will give you 5 million, but you need 6 million to use the select trick that uses 3 million. So collect either of the secret treasures as well, located on the moon or in the african mines (not both though). This will give you exactly 6 million. Get to the final boss, get hit and press select to use 3 million and regain health. Do it one more time and this leaves you with 0. Kill the boss to get the bad ending! --Wagamamalullaby 12:40, 3 June 2013 (EDT)