The discovery of the lantern seems to have solved a mystery that has always bugged me about this game. 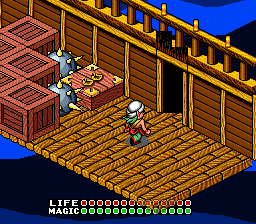 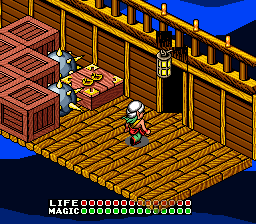 Look at that messy-looking bit above the door frame. I always thought that looked unfinished and wasn't *really* supposed to be that way in the end. Now I think what happened is that it was only temporary until the lanterns, which were supposed to be on the door frames, were finished. The problem is that there is only one lantern in memory, and since the door frame is part of the tile, they would have needed to make another one for the other side. Due to Equinox's isometric view, they couldn't just flip the existing tile, either. But the other lantern was never put in and the doors were left this way. The Ghost Ship shows the most obvious signs of being rushed. There's this, the unfinished Room 07-02, and a severe bug that can cause you to get stuck forever on this level that was never caught. --

The unfinished frames are even more obvious on doors that are against the water background. ----Flying Omelette 01:42, 29 May 2010 (EDT)

Yeah, blocky tile syndrome is always nice. See if you can fit the lantern over the door tile; remember that you can flip it horizontally, just keep it aligned to the tile grid.
On a side note, upload images in their original size; making them double-size is easier on you, the wiki, and our viewers by just using |##px where ## is the size of the image in pixels, doubled. Example:

Eh, copy-pasted the lantern over the door as best as I could fit it in. Hrm.

Oops! Sorry, I totally forgot I had double-sized the images while putting them together so I could better figure out what I was looking at. I'll fix it tomorrow if someone doesn't beat me to it. I think the lanterns were supposed to be on the corners of the door frame... --

That's why reuploading is possible. ;) Mistakes happen, even I make them. Anyway, the lanterns were meant to go where they are in that image I put up; they fit exactly (or would, if the top of the door frame wasn't incorrect). They match with the doorframe pattern (same lines) and the top bar, just not the upper area; probably just a bug nobody noticed. --

If version differences are acceptable for this wiki, I'm aware of some changes between the Beta version of this game and the final release. The most significant changes were made in the Quagmire Dungeon. All the doors to the key rooms are hidden, so it seems like the original idea behind that dungeon was for you to tear your hair out running into locked doors without being able to find any keys anywhere. The fact that the doors are all clearly visible in the final version makes the dungeon significantly easier (which might be a good thing because the abundance of spikes makes that dungeon tough enough, IMO). I made some posts about the differences starting here.

Given that on several occasions I've wanted to document the prototype versions, yes, I think going through all of the version differences or interesting bits of other versions is fine. Even for normal versions, like PRG0/PRG1 changes. --Xkeeper 17:56, 24 May 2010 (EDT)