If you want access to AX, you'll need Quadforce version 3 or higher (2 works, but is buggier). I'd recommend using USB Loader GX as your loader since you can instantly download CosmoCortney's codes (make sure to put kinobigc.bin in "/sneek" to enable cheats on Quadforce). We cannot help with the acquisition of the game, but as always, Google is your friend. Also, before you go do anything blindly, note that Quadfore overwrites your MIOS (Gamecube playing portion of your Wii). You'll need to reinstall a MIOS/DIOS-MIOS/DIOS-MIOS lite over it to play retail games again.

"Hit Playback then Freeze Me" - That's definitely an "M"

Okay, I know this is a small thing but I believe it is an M.

I've created a composite image which shows the differences between the front and backside. Of course I had to do some alignments for it to overlay correctly. Here it is: 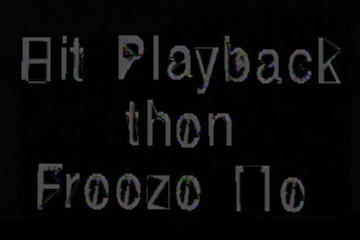 Barring the odd kerning and various distortions due to the corrupted mesh, it's a pretty much a perfect match to Arial Narrow. The gray parts are the original composite image, and the red parts are Arial Narrow rotated, scaled and kerned into place: 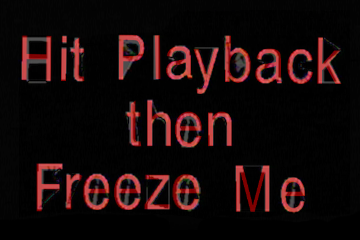 Now... this is the version with the M replaced with H (Another close replacement):

Doesn't work to well, does it? You can see the upper stubs of the M sticking out, so that cannot be an H.

Now for something else... It could be a leftover from modelling software, but there's only one scrap of evidence pointing towards it, and it's the text right here: [1]

There's a section called "Braid Tutorial". It talks about the sweep command whose icon is said to be this very text. There are no pictures though, and I also couldn't find any other references to this. It is probable that this is the case, since something like that has happened to me when exporting a model. It's not uncommon for 3D modelling software to use 3D models for special objects one can place in the scene so that they are visible in the viewports. Of course such object as the text seen right there was NOT made to be rendered as filled in polygons, which causes it to appear all glitched up. Most of the time such viewport icons are rendered as simple vector outlines.

I can't believe I only noticed this today since it's been months. Thank you very much. I was pretty set on the M as well. It's also awesome that you found where this bit of text comes from. Fantastic job. :) Stark Nebula (talk) 13:10, 5 October 2013 (EDT)