Unused King / Red Wizard / unknown sprite? http://8bitcity.blogspot.com/2011/12/unused-final-fantasy-nes-sprite.html I wonder if this is legit. The Pub sign seems like it'd be harder to notice in comparison, but I'm not precisely sure how hacking works. On the topic of unused things, I also found a discussion of some other early text: http://flyingomelettespalace.yuku.com/topic/10097/Final-Fantasy-Text-Dump#.T2Eez-W1qSo - That place and GameFAQs seem to have the full text dump if any of you would like to give a deeper analysis. LinkTheLefty 18:47, 14 March 2012 (EDT)

This seemingly-misplaced door in Coneria was replaced with a wall in the American release.

I don't see the door pictured in either the original Japanese release or the FF 1&2 re-release. Maybe there's something you have to do for it to appear? Maybe the door only exists on a corrupted ROM? - Furrykef 18:45, 14 March 2012 (EDT)

It's entirely possible my ROM has been corrupted; until someone else can confirm independently, I've removed the section from the article and put it here. --Nicole 11:51, 29 March 2012 (EDT) 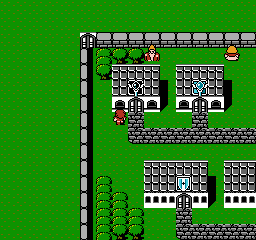 This seemingly-misplaced door in Coneria was replaced with a wall in the American release.

Isn't the code that deals the extra damage simply bugged? The wiki typically doesn't cover bugs, but this one might warrant mention since it makes the type definitions on monsters and weapons completely pointless. --Dragonsbrethren (talk) 15:17, 31 August 2013 (EDT)

"Hi tcrf! Love your wiki, I've been going there more and more regularly! I've just discovered a regional difference in the original Famicom Final Fantasy, that you don't have listed. I have confirmed that "tent" type items had their names changed for the US release, in a manner that would be rather confusing if one has to refer to both versions.

My first thought when looking at the "Little Dude" image was that it kinda looks like a Jizo statue. https://uncoveringjapan.com/2012/09/12/crash-course-jizo/ That could just be the palette used in the capture, though.