I do believe that someone has posted the code before like these ones:

But, the person did say in this one topic to use CB or Lower/Higher on the two X's. But for some unknown reasons, they don't seem to work for me. Whenever I tryed to use the codes on the Japanese version. (Since these codes only work for that version) Unless if someone has managed to figure out what the two Letters or Numbers are for the two X's and got it to work. :/

The unused tune features in this article is present in the sound test of the final retail game. Does it still qualify as unused? --GuyPerfect 19:09, 3 February 2012 (EST)

When fighting O2, Kirby uses a combination of Ribbon's flight and the Crystal Shards' power, noted by a ribbon icon and a crystal icon in the Ability slots. Has anyone tried to make these pseudo-Abilities "work" ("work" used in quotes because you technically wouldn't be able to actually use the Abilities' actual powers even if you tried, by "work" I mean filling the Ability slots with them) outside of the final battle? It would be interesting to note things such as their effects or their Ability Star colors. AquaBat 21:58, 17 February 2013 (EST)

If you change the current ability through hex editing, you can set it to either just the ribbon or the ribbon and crystal, and the symbols will actually show up in the slots, however if you then try to use the ability, it freezes the game. (fyi: in hex, where ability values are 00 for nothing, 01 for fire, etc. Ribbon is 24 and and Ribbon+Crystal is 25) --Sup3rSloth 15:10 23 January 2016 (ACDT) 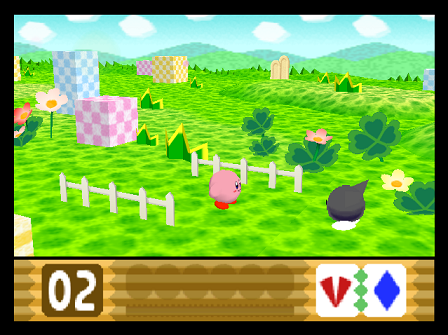 In the beta, Adeleine, Waddle Dee and King Dedede were supposed to be playable characters on Story Mode (by this screenshot: https://web-beta.archive.org/web/20150115215149/http://64dd.net/content/multimedia/screenshots/protos/k4_beta_3.jpg)... but on the finished game... these concepts were removed. Someone whould search for the coding or well... the rest of the coding... SimisageJittens 21:32, 27 November 2013

Kobosuke pointed out that the early Kirby portrait shown in the article on the page can be seen in action in this early screenshot. Worth adding, I think! --GlitterBerri (talk) 04:13, 27 December 2013 (EST)

I've found a strange sound that whould have intended to fit Adeleine (the Painter Girl) as a playable character. In the final, she is voiceless. Note this is slow down since the original sound it's incorrectly speeded up on the game sound test. --SimisageJittens (talk) 15:21, 12 April 2014 (EST)

Unusual, but I doubt it is meant to be her voice. Despite the fact that there are very few vocal sounds in the game at all, they wouldn't use a highly-repetitive sounds like that for a character. A sound like that would belong to a background element, such as a TV or radio. There are some working TVs in the third stage of Shiver Star, but they only show static. The way the sound gets choppy at the end could have been meant for the TV channel breaking up and going to static. I imagine this would have been very distracting to playtesters, which would have lead to its removal. I'm speculating, of course, but that's really the only place in the game where it would fit in. It doesn't match any of Adeleine's actions, even when she's angrily swiping around her brush during the boss battle. I'm also doubtful that the sound is "incorrectly" sped up. Some games do store sounds at higher speeds to save on space, but the games' sound engine would take care of slowing it down properly. In summary, no, that's probably not meant for Adeleine. --Peardian (talk) 15:08, 12 April 2014 (EDT)

The gibberish sound is actually the first 2 phrases of the Traditional Japanese poem called 'Iroha' which is the Japanese equivalent to the ABC song. --MSoldier (talk) 22:03, 17 August 2016 (UTC)

The Models Resource just uploaded, what it claims to be, an early model of Dark Matter. Can anyone confirm this? If true, it would show that Dark Matter was apparently going to have a more traditional appearance in the game rather than the redesign the final version ended up going with.

Can someone look into this?

Even though I'm pretty sure these are completely fabricated and fake, I would like some more concrete information on these possible finds: