If anyone can tell me exactly how to properly access a gamecube ISO I'd be willing to improve this page as much as possible. :D

I am very interested in taking a look inside Pikmin myself.

It's been a while since I actually saw how map_06 looks like, and I can't check right now. But the trailer looks like it's almost all on map_06. There are the big open gray areas with nothing, weird Distant Spring lookalike areas... {EspyoT} 18:02, 15 April 2013 (EDT)

dataDir/intro/nintendo.h is a C++ header file. From the looks of it, it represents some texture, most likely the Nintendo logo. Kinda weird. I'll post the first 5 lines here:

There are some .h files:

I just decompiled the sysBootup.exe with IDA Pro and found the message box. Can we get a way around it to start the game? 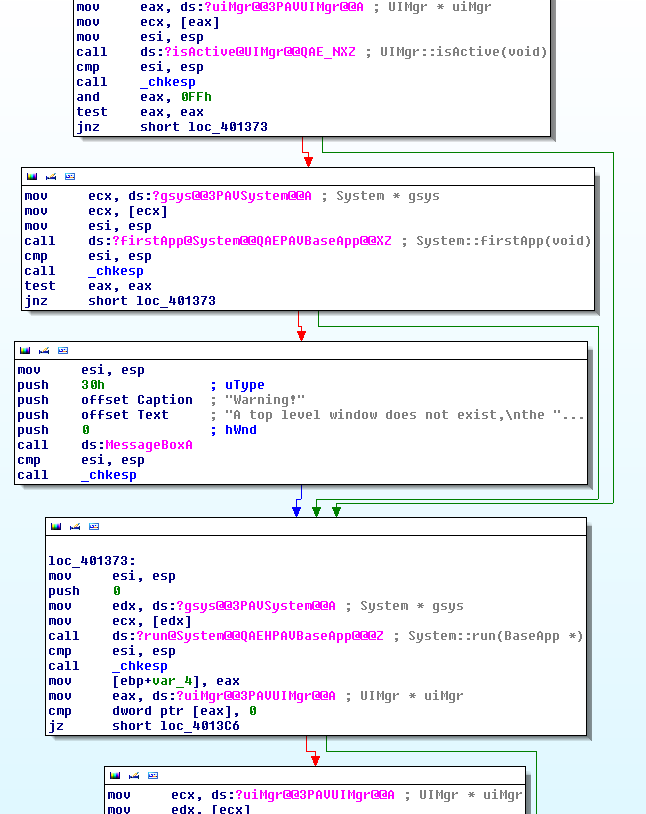 Someone on Something Awful managed to access it. Apparently it required an obscure .dll from Win98 LobsterBox (talk) 14:42, 13 August 2014 (EDT)

Hello sorry if this sounds like that felling since i am not a hacker anyway, did anyone try to get the bad ending in maps such as tuto2?Something like the second player might be revealed.Thanks

Well sure it probably would not be revealed but if the game crashes it might mean that it was programmed or something... Klemen702 (talk) 08:56, 24 February 2014 (EST)

I think the game would more quickly crash in normal play. And in the bad ending cutscene, the game could crash sooner because it has no data for the cutscene positions and such. {EspyoT} 09:03, 24 February 2014 (EST)

I imagine that every area has data for where the cutscene should take place. It's probably in front of the S.S. Dolphin and in front of an Onion, but there should be other key points as well. For the unused areas, chances are they didn't bother to add that information. As for the two-player things, as far as we know, all that exists is just text mentioning a 2-player mode, no code. {EspyoT} 13:57, 24 February 2014 (EST)

Similar to some other GC games from Nintendo, Pikmin 1 uses the BMS format (comparable to midi) for at least some of its music files. They can be found in dataDir/SndData/Seqs in the pikiseq.arc file, which is not a RARC archive, but a headerless binary blob of data. The BARC header for parsing this file is located inside the Start.dol. According to it, pikiseq.arc contains the following files, in this order (in the PAL version of Pikmin 1):

The dummy files all point to the offset 0 with the size 0, they might once have been music files that were removed, or just empty slots that could be used to store files. Two of the files stand out to me: demobgm and sysevent.

The sysevent file is a strangely formated file because it doesn't define tracks directly. I am still working on playing it.

demobgm seems to contain several pieces of music unlike most other files (I counted at least 8, each music piece is distinguished by a series of 0xC1 events, each followed by a single byte for the track number and three bytes for the track offset). It also contains two strings near the top of the file, probably debug strings that are printed to the console when the audio engine plays the BMS file:

I will attempt to dump the music pieces from demobgm as seperate midi tracks. At the moment I am unable to recognize them, but I am fairly positive that they are unused due to their fast paced nature. --Yoshi2 (talk) 08:01, 5 October 2014 (EDT)

After showing the music pieces from demobgm to somebody who knows Pikmin 1's music much better than me, it turned out that it is actually used in form of sound effects being played on various events, such as collecting ship parts or having completed the ship. The sysevent file remains a mystery though. --Yoshi2 (talk) 16:30, 6 October 2014 (EDT)

Btw, does Iwagen have any animations? Like, can it actually move on it's own? or is it possible it was just a static obstacle for puzzles, like the fire spouts used in game. Corvus (talk) 23:00, 29 April 2015 (EDT)

To be honest, I thought that was already on the article. Anyway, according to the animation editor, it only has one animation, and that's for shooting. {EspyoT} 15:02, 30 April 2015 (EDT)

I think that the "I am so very tired..." message would be displayed if the player failed to get the required 25 parts in the 30 days (and then the attempt to take off in the Dolphin failed). This idea is supported by the fact that in the same place there is a message for if the player suceeds. --Pikmin editor (talk) 03:38, 19 July 2015 (EDT)

In the PAL 1.0 release (and maybe others) of Luigi's Mansion, there is a little movie advertising Pikmin. Now, I know very little about Pikmin, so someone who is a little more knowledgeable about this game could make out some differences from the final build. I have the equipment to record it, however, it may not be of the best quality. One oddity I noticed was that even in the PAL version, it still had the E for Everyone logo at the start. If this was exactly the same as the American version, then the footage must have been recorded before the first American release of Pikmin.

If this issue has already been sorted, please tell me.

How do you view the weird off-screen things on, say, the title screen and such? Do you need an Action Replay code or something, or a special button combination? --Sultanofswag89 (talk) 14:20, 1 April 2019 (EDT)

You can use the Dolphin emulator. Go into the graphics settings, then the advanced tab, then check the "Free Look" option. When you hover over that option it gives you an explanation of the controls. This should work on all or most Wii and GameCube games (including Nintendo 64 Virtual Console). --Hiccup (talk) 14:26, 1 April 2019 (EDT)