I think I found a YouTube video that documents the Limbo Page. However, since I'm at school right now, I can't see it. I'll get around to viewing and/or adding it later. --SpongeBat1 13:19, 18 January 2013 (EST)

Besides the PC version, there is a Plants vs. Zombies game for nearly every single handheld or mobile device. There has to be at least ONE version that has at least ONE noticeable something-or-other. We should find them and make more pages. AquaBat 16:55, 18 January 2013 (EST)

The positions 117 to 120 of Watery Graves are unused in the mainmusic.mo3 file (PvZ soundtrack file), because after the position 116, the command B5E jumps to the position 94. (See screenshot below.) These positions have 17 seconds: 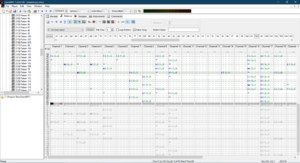 I'm just going to copy-paste the text my friend sent me over on Discord. Her name is nataliris, she's one this website too.

PLANTS VS. ZOMBIES: OH MY GOD THIS IS A HUGE DISCOVERY. THE PVZ1 BETA IS NOW AVAILABLE TO DOWNLOAD! but there's a catch lol (see below)

Big thanks to u/cjkaminski, u/SyrinxH, and u/philo-menamark for this! This is such a huge discovery and I can't believe that someone ACTUALLY still has it after almost 13 years.

How did I even manage to find them in the first place? Basically, the game has a readme file (who reads that lol), but turns out this is an extremely important key to finding this. It literally lists the nicknames of the game's beta testers, and there's around 100 of them. I decided to plug them into Reddit, and I managed to find only around 5 people who are still using their account. I decided to ask two of them to see if they're the same person as the game's testers, and both of them responded. They were able to prove that they're the same person as they sent me this: https://imgur.com/a/Glz8t9X It took me over a month to get this. The first person was quite busy and wasn't able to look for it, and the other person never responded after the initial reply. Finally after almost a month, the first person was able to reach out to me again and said that they got in touch with someone who can help, though they weren't able to contact me for some reason. After around 10 days, they were finally able to reach out to me via Reddit chat and sent out THESE. I just woke up at like 3:30 AM and was in for a surprise.

As I've said before, there's a catch. It seems like the game has a DRM that prevents you from playing it. It tries to connect to a now-defunct server at beta.popcap.com which obviously doesn't exist anymore now, given how it's been 13 years since the beta was out. Someone has to remove this DRM first before we're finally able to actually play this game. Though you can still extract the main.pak. There's some content that didn't make it into the final cut.