There's a few other things in Portal to point out for this page. You can spawn any of the Half Life 2: Episode 1 enemies in this game as they're left in the data, but they will have no sound. Also, there is the infamous 'Sparta' unused texture in the files; I can rip it, but I'm new to editing pages so I'd have to let someone else build it. There's also an unused sound file for GLaDOS that simply states in her voice 'File Deleted' or some-such. --Sarikuya 20:53, 21 October 2010 (EDT)

You can just rip it and upload it, then link it here (use [[Media:(file name.png)]]). As for the Half Life 2: Episode 1 thing, that's not really interesting, as pretty much all the Source games, being built on the same resources, are able to do that. -- 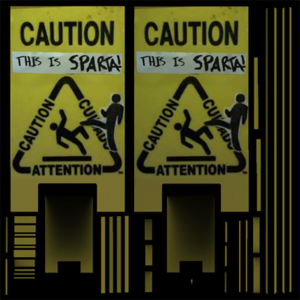 Boot to the head.

Also, there's tons of unused textures in the original Half Life game, both on the original disc and in the Source one. Would it be worth it ripping those to make a page for that?

Probably. There's the Half-Life wiki, too, which might have some stuff there that could be of use. --

Ten bits says that was to be used during the final battle. You can probably guess where. --

Can I post the images? I have found them, also the sound. Could extract and see/hear it -Gabrielwoj 23:16 (GMT -3)

Unused Area Outside of Chamber 17

There is an unused area that is located just outside of test chamber 17 (the one with the companion cube). It uses the HL2 models rather than Portal models. Also, it is a test for the "Flinging" mechanic, which is unused in chamber 17. 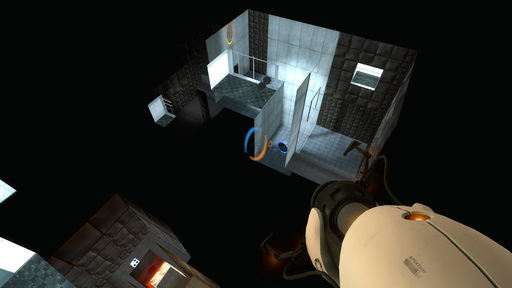 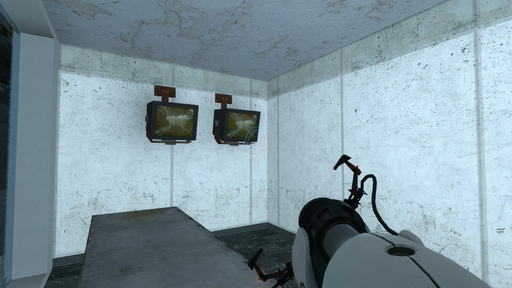 (sorry that the images are so huge...)
— The preceding unsigned comment was added by BowserKoopaFTW (talk • contribs)

Isn't this already mentioned in the article? Although, some more elaboration wouldn't hurt. --Smallhacker 20:48, 23 July 2012 (EDT)

Really interesting find. This exact map area is used in Chamber 17 Advanced. There are literally no changes between this unused area and the ending of 17 advanced! Even the nodraw is in the same places that this segment "joins up" with 17+. Maybe the developers were experimenting with it in the standard chamber 17, decided it was too complicated, and saved the concept for the advanced chamber. Quat (talk) 12:26, 13 June 2015 (EDT)

The starting part of the separated area looks different from what is used in the final advanced chamber. The unused one requires a companion cube to climb up, but in the final version it's just a stair with slightly larger steps. --KabanFriends 04:48 February, 21, 2022 (EDT)

I recently saw this video which is about the beta of portal, and contains several screenshots. The one thing I find of note is that it contains a picture of the assembled old portalgun (See 2:30). I'm not sure if that's something that should be added to the article (and also I don't want to use a screenshot of a video; would be nicer to find the source image). --Pokechu22 (talk) 14:30, 15 November 2014 (EST)

Audio that's only in the captions but never displayed

This is something that I found myself: There is some text in the closed captions (that is displayed in-game) without any accompanying audio. It's located in part of the Escape areas. Here's a video of it I made. The text is "I feel sorry for you, really, because you're not even in the right place." I'm not sure if there is any audio to go with it that just is unused, as I've been having issues with accessing the sound files. --Pokechu22 (talk) 14:30, 15 November 2014 (EST)

I think I remember hearing the associated line when I played the game. I had captions on the whole time too, and if I were to see something on the text, but not hear the associated line, I'd have remembered that as an oddity, and I currently do not. {EspyoT} 07:03, 16 November 2014 (EST)

If you open the console and type "maps *" it gives you a list of maps. There are the two background maps (background01, the relaxation vault, and background02, the menu background after completing the game). Also there's the three "escape" maps and fifteen "test-chamber" maps. These "testchmb" maps are numbered from 0 to 16, but there's no 12 for whatever reason. Could be a scrapped idea. Anyone have any clue what happened to it? Quat (talk) 12:31, 13 June 2015 (EDT)

Anyone know if it's possible to see this? After decompiling the map (background2) I noticed a companion cube to the right of the table with the cake. When I check in-game, however, the cube does not appear to be within the view of the camera. Clone5184 (talk) 18:13, 7 June 2016 (EDT)

I have a link to some beta maps for Portal, if anyone wants them. I think it'd contribute quite a bit to the page, seeing as though they're beta/alpha maps, after all.

— The preceding unsigned comment was added by Walllable (talk • contribs)

I got it off a reddit page on the /r/portal subreddit, over here: https://www.reddit.com/r/Portal/comments/4xjmz9/i_saw_some_people_asking_for_the_portal_beta/ Walllable (talk) 23:20, 14 August 2016 (EDT)

Around a month ago, the 2005 and 2006 portal betas were supposedly leaked. Did anyone happen to find any of those files before they got taken down from here?: https://facepunch.com/showthread.php?t=1523850

The link was removed, but the files are still floating around and there are several screenshots and videos of this already. — The preceding unsigned comment was added by Dooki51 (talk • contribs)

I think this is actually the Project Beta leak. I looked at the files, and they aren't genuine, at least not entirely. I'm sure of that because I actually made the player animations included. The files are 100% the same. Some of the maps are based upon actual beta maps that a team member received, though many of them were pretty damaged from what I've heard. Much of this is recreation and the line between what is and isn't genuine isn't exactly clear. --Paynamia (talk) 03:52, 8 January 2017 (EST)

Yeah, I found a archive of the files here: https://archive.org/details/PortalBeta
Claims to have "Almost ALL of the Portal Beta files", but sadly I'm not able to check the files out because of my computer's lack of disk space.

That seems to be the same file as the Mega link above. I haven't downloaded both to confirm, but the filenames and sizes are both the same. --Paynamia (talk) 03:40, 10 April 2017 (EDT)

One thing I will say is that I downloaded the 2006 files, and there's audio files for GLaDOS that don't exist in the final version, apart from a couple still having their subtitles in the final game, although the sound files themselves don't. There's also test maps too. Blayer98 (talk) 15:18, 30 December 2017 (EST)

Another update, I've sen that the Properties of the GLaDOS files has "this file came from another computer" and also has a date of 2006 on them, as well as having lines that aren't in the final, should a pre-release page be made and these files put up? Blayer98 (talk) 19:46, 18 January 2018 (EST)

Unused pellet launcher outside of Chamber 18

When decompiling Test Chamber 18, I came across something interesting. Outside of the map (below the room with the turrets in the top 2D view) is an early version of the rotating pellet launcher. I've uploaded a screenshot of it here. There were a couple interesting things I noticed about this: