https://pastebin.com/nxkS0eVz maybe worth making a separate page for that, don't know.--Cah4e3 (talk)

Yes, it is in fact used - it's hidden in the room to the right of the Fridge Game (have Scooby sniff around the right edge). When given to Velma, the relevant description is used:

The following line is not connected to the above, but is used after you give Velma the list of recent wreck robberies: 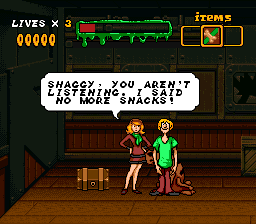 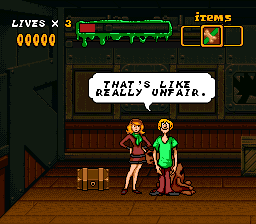 USED! talk with Daphne 10 times at the same place, and line will be spoken. When moving to another location, counter is resetting to 0.

USED! actually this is two different dialogues. first line is for the case when you try to get the items ready for the trap for Vampire. two second lines for Shaggy and Scooby after the Vampire unlocks the very first door, after the Velma line. — The preceding unsigned comment was added by Cah4e3 (talk • contribs)