From The Cutting Room Floor
(Redirected from Talk:Sonic Adventure 2)
Jump to navigation Jump to search

It's a bit obvious in hindsight, as explained by SadisticMystic in the description, but you can see some remnants of the single-player version of Cosmic Wall in the 2-player battle arena. Interestingly, you can find the goal ring and even touch it to win! {EspyoT} 13:05, 18 July 2012 (EDT)

Is there any merit in noting the differences between the final game and the Trial Version from the demo disc that came with some Dreamcast titles? Like I know that Sonic's model in the Trial Demo actually has his regular shoes, and not the SOAP shoes that were used in the final. Goblinaro (talk) 01:21, 3 December 2013 (EST)

Depending on when the disc was originally made and what the files are dated, it might qualify as a prototype and hence get its own page under the "Proto:" namespace. -WarioBarker (talk) 05:42, 3 December 2013 (EST)

At around 1:06 of this video and an accompanying document tell how if you press Y on the second controller while on Metal Harbor, Sonic acts like he is on a board, when he's not. This doesn't work in the GCN version and I'm not sure if this works in other levels. I get the impression that this is a debug leftover that wasn't disabled before release. What do you guys think?--Spiritix (talk) 07:22, 12 October 2014 (EDT)

Oh yeah, that thing. I'm surprised at how it's not on the page already. Then again, a lot of things aren't... But yes, that is very likely a debug feature leftover, much like how you can control the Egg Walker in Sonic Adventure... something I just realized is not on TCRF either. {EspyoT} 08:13, 12 October 2014 (EDT)

The Japanese voice track is cut in rips due to size limitations. If you're using an original GD-ROM or a GDI the Japanese voice will be present. Comradesnarky (talk) 00:44, 17 July 2015 (EDT)

The TV setting option wasn't scrapped at all, but it's apparently only available if you're using a PAL Dreamcast without a VGA box/cable. I remembered as much from back in the day (w/ PAL DC and RGB SCART cable), but for the lack of a working PAL system, I ended up having to download the game and try it in nullDC. Set "Broadcast Format" to "PAL" and "Cable Type" to ex. "TV (RGB)" and you get this on startup OR when accessing the function from the Options menu. (Umm, disregard the window title bar saying "NTSC", I'm not sure what happened there; it does not appear in NTSC mode.)

I'm not removing the whole section from the article just yet, because the title graphics "TV SETTING" and "DISPLAY TEST" don't show up in nullDC - I'm not sure if they're actually unused or them being missing is just a glitch in the emulator, and my memory is a bit foggy on this (I think they're supposed to show up...) --Xdaniel (talk) 23:45, 29 July 2015 (EDT)

Really? Well, I was using NTSC so I never saw this obviously... Since they were ripped off NTSC, that still makes them unused for NTSC, right? I mean, we'll have to indicate that it's on PAL, but on NTSC no...
The not using a VGA box/cable part, though... is that the only reason to have the TV setting option? I never did find out why it was removed from the GameCube version of SADX, does the GameCube not do VGA? Or is it the same with SADX, where you can get the option to show up on the PAL version?
EDIT: I tried your settings and couldn't get the menu to come up. Did you use a PAL version of the game as well? --

I did use a PAL copy of the game, although - and I'll need to double-check this - I'm quite sure that it's in the NTSC version as well. If my slightly foggy memory is right, and I did see this back in the day, it must have been on a NTSC version as I didn't have a PAL version of the game back then (ironically enough) but the Japanese "Birthday Pack" edition, booted via a GameShark or Codebreaker disk...
The reason for having the TV setting option is that Europe's PAL standard is 50hz and many older TV's over here did not support NTSC/60hz output. Some games on newer systems, which were able to output both such as DC and GameCube, thus had an option to select either and usually a test function to check if the TV supported it (i.e. switching to 60hz for a few seconds, then asking the user if the picture was fine). VGA on Dreamcast is always 60hz from what I know, so the option is useless when using VGA. I don't have SADX to try on my GCN or Wii, but PAL SA2B on a PAL system does show a very simple 50/60hz selector on startup, tho it's not available from the Options menu. --Xdaniel (talk) 12:25, 1 August 2015 (EDT)

Huh... thanks for clearing that up. Honestly, I've only ever played NTSC SA2B and SADX on TV, so I have no idea about anything else. I just know that I'd never seen those graphics before. If they were on Dreamcast, or PAL, or both, then I would have no idea. I guess I should've checked first before putting up images and everything.
I got a PAL ROM and had the TV Settings come up on start up and in the options menu (now I know what the numbers are for...). Indeed, everything is used except for the title graphics for the top. I suppose I need to get rid of everything except for them. Does that sound good? --

Well, I guess we still haven't 100% confirmed that the menu is functional in the NTSC version when running on a PAL system... You said you couldn't get the menu to appear in your NTSC version, and I can't be completely sure my memory is correct. The menu does look very familiar, but it's been 10+ years since I played my NTSC copy on my PAL machine (which is stored away somewhere and missing its power supply and button, the reason why I can't check this).
I'd suggest removing the ripped graphics from the article aside from the two title banners, then rewriting the section according to the findings here and adding a todo regarding confirmation if the NTSC version has this menu? --Xdaniel (talk) 16:30, 1 August 2015 (EDT)

Moved the graphics to Misc. graphics, no point in having a separate section for it. I can keep trying to get the TV Setting option to come up on NTSC, but I noticed the description of the TV Setting options specifically mention PAL TVs. This isn't hard evidence, but it's something, maybe.--

this is unused right?

Going through game files and found this, since she isnt a playable character though its never used right? Technocolor (talk) 06:12, 20 April 2019 (EDT) 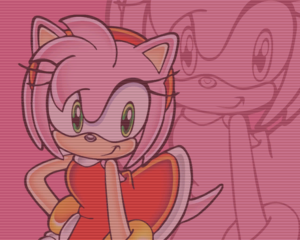 IIRC exit to the main menu during Cannon's Core and restart Last Story and Amy will recap events up to that point. Either that or reset the console during the cutscenes before the stage and, again, restart. Ch1p (talk) 08:27, 20 April 2019 (EDT)

Hi there, I had a look at the game's manual and for Download Events it states that the developers had plans to develop DLC for Action Stages and Kart Races, but only Kart Races were created, is it possible to get Action Stages to work under the Download Event menu? --Blayer98 (talk) 15:08, 3 January 2020 (EST)

I have made some edits to the Kart Race DLC just for fun and I noticed that type 1 and 2 seem to be a thing in the game's code?

Type 1 and 2 DLC does not show up on the Kart Race menu via Download, and currently only display on the Download Event menu, however as of right now, I can't play them because the game won't let me and I'm not sure if it's got something to do with the level list in the file? I also can't see any changes to the Stage Select screen with these types added in.

Just for clarification: Type 3 is used for the Download option on the Kart Race menu and allows the other characters to be played in that course. It also replaces the DLC kart with the one your chosen character uses and ignores any AI data that's been set for the other racers, even when playing the DLC with this type on the Download Event menu.

Type 4 is the normal setting that all 3 Kart Races use, and when played via the Download Event menu, the AI data is set for the other racers, but not when racing in the Kart Race menu via Download, and I think this is because some characters have slow speed for their karts?

The page mentions Eggman falling through the floor in Cannon's Core as an anti-piracy measure of some sort and the source it cites is just a forum post with "it's an anti-piracy measure" with no real details. I decided to do my own testing using a GDEmu, a byte for byte dump of the US release, and a cut down dump from 2001 by the group Echelon. Keep in mind that the GDEmu relies on the same MIL-CD exploit CD-R backups do (in case that matters). My findings were that the byte for byte dump plays Cannon's Core just fine, but the 2001 cut down for CD-R dump does exactly what this page describes. The only thing that keeps me from declaring what this page says on the matter as false is that the Echelon dump has a cracktro and I have no idea if this plays into anything. Otherwise, it seems it may just be a botched scene dump.--Gold lightning (talk) 21:22, 19 January 2021 (UTC)