"Capcom? In my Zelda? It's more likely than you think." Does that mean people were surprised that Capcom had something to do with the game? I know they were with the Oracle games on the GBC...

Two of the unused songs apparently appear in the unlockable in-game sound test - "Link to the Past Title" seems to be track 6, while "Dark Hyrule Castle Intro" appears to be track 2. The Vaati intro also plays as the beginning of track 7 - but that's not a standalone version, of course. I wonder if there's a way to get more than the 52 tracks you can normally access in the in-game sound test, or if there's a more complete (debug) sound test hidden somewhere else in the game. --Aoi 17:30, 20 October 2010 (EDT)

No, I was just... trying to be witty. If you think you are wittier, rewrite that. --

I was just curious, really. (I'm also curious as to why you removed my formatting... not upset, just wondering. I know I'm still learning wiki-coding and most likely doing it the wrong way, anyway.)--Aoi 02:02, 22 October 2010 (EDT)

Because MediaWiki understands that a newline is a newline and you don't have to explicitly use HTML to say it's a newline? :P --

I found this website that references some unused content left in the game. We should be able to pull something from this site and use it to update The Minish Cap page. If someone doesn't get to this then no harm done as I eventually will. I'm just putting this out there for anyone who might be eager to get this done. --Cuber456 4:47, 19 July 2011 (EDT)

Holy crap that is priceless. More nice finds :). It can't get any clearer that the fire rod was suppose to be in the game originally. Interesting that there is a dungeon after the last one. Since you found both of these, you should add them. Put the fire rod information under where the fire rod is on the page. I would add a new section for the Biggoron's Dungeon. --Cuber456 13:02, 21 July 2011 (EDT)

Thank you! I searched Biggoron's Dungeon with a few codes, but I didn't find it; it seems that it has been completely deleted from the game's data. Instead, I found nearly 30 unused rooms which I'm going to add in the next weeks. --Dark Linkaël 15:12, 21 July 2011 (EDT)

Just to say that the "Biggoron Dungeon" stuff should be in a "unused text" section and not in a "unused rooms" one: the rooms are not in the cartridge. However, one hypothesis that I trust is that the Biggoron Dungeon IS in the game: it must be the little cave where we find all the other Gorons. THink about it: without this cave, it is impossible to talk to Biggoron. So it is ok to think that this cave is the Biggoron dungeon. --Morwenn 13:45, 23 July 2011 (EDT)

Has anyone gotten those debug items to work properly? I am talking about the (DEBUG) Mega Crush, (DEBUG) Enemy Set and (DEBUG) Cell Overwrite Set. Do they actually function or are they just useless items(like the fire rod) in the final game now? --Cuber456 0:50, 30 August 2011 (EDT)

The Cell Overwrite Set works fine and has roughly the same effect than the Fire Rod (Actually, with such a name, it is logical to modify the tiles properties). However, the two other items just do not do anything when we try to use them. --Morwenn 11:55, 30 August 2011 (EDT)

There are quite a lot of unused maps and we just pu them at the same place without any description. Should we split the article and create a new page with a description of each of them (there are 29 unused maps)? --Morwenn 16:07, 04 September 2011 (EDT)

That depends on how much information can be added to each unused room. Some of the rooms look like they can be described in more detail than others. If there is actually a decent amount of info to write about each used room then they probably should get moved to a new (sub)page since descriptions of different rooms might be too much for the main page(I feel). It would either make the main page cluttered because of all the descriptions or it would make the page very long. --Cuber456 17:07, 04 September 2011 (EDT) 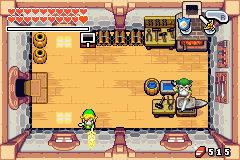 The wall in question.

Should the bomb-able wall error in Link's house be mentioned in the article? For those who don't know, there is a southern wall that makes a different noise when hit, as if it could be destroyed, and it stops making the noise when hit by a bomb, but nothing happens after that. --Metalman 22:35, 28 August 2012 (EDT)

I recently heard about a demo version of The Minish Cap, and found this cartridge without has the mentions "not for resale" and "demo". On the same website, there is also the game box with the mention "for display only". There a dedicated page on DAT-o-MATIC which lets me think that the demo has somehow been dumped at a time (not verified though) and could still be somewhere on the internet. It would be great if somebody could find this demo and expose the differences to everyone :)

I went through the NFR Demo and noted all the changes. I doubt it's worth adding to the article, but if an admin decides otherwise then go for it.
- The demo cartridge seems to contain the full game, with time limits on each of the three areas.
- Falling in water doesn't take away health.
- Start with 5 heart containers in Minish Woods/Deepwood Shrine.
- Start with 6 heart containers in Cave of Flames.
- Player name is defaulted to LINK.
- You can make it to Deepwood Shrine from the Minish Woods area if you move fast enough. It seems like the timer resets once you enter Deepwood Shrine, as I was able to make it about half way through the dungeon in that attempt.
- Cave of Flames starts you off with a bottle, four bombs, a basic boomerang, and the first Tiger Scroll (Spin Attack).
- Areas have blockades at the start point. There is obviously no blockade in Deepwood Shrine if you get there from the Minish Woods demo.

I don't know when the time limit resets or anything, but I managed to go from the beginning of the Minish Woods area to the first encounter with the kinstones guy in Hyrule Town (there is enough time to do so). I now also think that every element of the game ought to be present in the demo. Even in the final versions of the game, we don't lose health when falling in water, so that's not a difference. I will try to investigate a little bit further but it seems that you are perfectly right and that no difference is significant enough. -- Morwenn 00:43, 13 August 2013 (UTC+1)

Mini-Game of The Minish Cap

There are a few months ago, I found something on a flash mini-game of The Minish Cap on the official website Nintendo of Europe.

This mini-game contain areas an older version of The Minish Cap.

Screenshots an older version of the game:

Images extracted from the mini-game:

Some areas are also visible in the trailer from E3 2004.