From The Cutting Room Floor
Jump to navigation Jump to search
Translate this page
Other languages:
English • ‎français

Team Fortress 2 (shortened to "TF2" by many) is a team-based multiplayer first-person shooter created by Valve, the same creators behind the Half-Life series among others. Starting its life as a far more gritty and realistic military shooter more in the vein of its predecessor (and having its life end at various points according to the community), it was initially released on the Orange Box in 2007 for Windows, Xbox 360, and PlayStation 3. It was also ported to Mac OSX in 2010, with the Linux community seeing a port in 2013. The game features nine different classes to play, all with their different features, weapons, and cosmetics. Oh, so many cosmetics...

Not to be confused with the numerous reference pose glitch(es) which are not in any way related to the Civilian class, the Civilian is a very unfinished class that would have assumedly been a revamped version of Team Fortress Classic's Civilian, a very weak VIP-mode class that had to make it from one point to the other while under attack. This Civilian shares his older incarnation's 50 HP, but has no weapons, voice lines, animations, or even his own model (though he does have unique death screams and Medic calls), meaning he can do nothing but slide around and jump. The Civilian class could be easily accessed early on in the game's life by typing join_class civilian in the console, but this was quickly patched out on December 20, 2007.

It's not entirely known if Valve ever intended to complete the Civilian or the VIP game mode, but he does make a small cameo at the beginning of the Meet the Sniper trailer in the form of a bobblehead on the dashboard of the Sniper's trailer, which also serves as a nod to Sniper's role as the defending Assassins in VIP.

Initially used as the background for the main menu in the beta and console versions, this "map" also had the hidden purpose of pre-caching assets, namely class models and map-universal props, hence why these are in the map "off screen" if one were to access it in-game. The map itself is based on the final capture point of cp_dustbowl. The main menu was reworked during the beta period in the September 21, 2007 Patch, leaving this unused outside of the console versions. This map can be accessed using the console command map background01 and can also be re-enabled as a menu background with map_background background01.

An oddity in the truest sense of the word. Nobody really knows what cp_cloak's purpose is. What was it used for? Nobody is certain. The map features a control point, and giant scaled-up player models standing in the skybox area of the map, seemingly staring in through the windows in the map.

One possibility for the purpose of this map could be for testing eye movements of player models. And as the map name is Cloak, perhaps it could have also been used for testing the Spy's cloaking ability? The control point would allow testing of being unable to capture it while cloaked, and if the giant player models were for testing eye movements, it could have also been perfect for testing if the classes don't look directly at a nearby cloaked enemy Spy. However, the giant player models' eyes are seemingly missing their irises (or their eyes have just rolled back into their heads) which does put a small hole in this theory.

Cactus Canyon is a Payload map first released in 2014. Valve had intended to complete work on the map, with it receiving a total of 9 updates before Valve shelved the project indefinitely.

Also releasing in 2014 alongside Cactus Canyon, we have Asteroid, a Robot Destruction map. The map takes place in a space station with outdoor areas in open space. After initially being added to the game, it received a total of 12 updates before work on it was shelved.

In the April 2020 source code leak, there is "staging" code for a new player condition and some code for jetpack functionality. The code is related to two concepts that were being tested for Asteroid;

Valve tackled this idea by creating a new player condition. The player condition TF_COND_SPACE_GRAVITY was intended to be applied to the player while outdoors, which would then modify that player's gravity and equip them with a jetpack. The space gravity concept never made it into the map proper, and the all class jetpack concept was further refined into what we now know as the Pyro's jetpack weapon, the Thermal Thruster.

While the following maps are not unused, there are sections of them that are normally inaccessible without noclipping or other means. This does not count areas that the player was blatantly never meant to be in, such as the ghost's spawn area in Harvest Event.

Two unused areas exist in this map. The first one, located just outside the first control point, is a simple two-tiered room. Considering its design, it may have been considered as a spawn point at one point of development. The second area, however, is more intriguing. Located below the second control point, this area has more detail put into it, with cages and containers in it.

Spy was going to have a training sequence in Dustbowl, but it was cut. It is fully functional minus some missing text. To access it, go to Training and select Spy, then press ~ (default key) to open the console, type "map tr_dustbowl", and press enter.

If you try this with either Demoman or Engineer, the hint box will show only a title and the countdown clock will freeze at 9 seconds.

Within the game files, there are 4 item qualities that currently remain unused, one of which shares the same quality color as the Vintage quality.

The following poses were used in marketing images, but never actually used in-game. The animations have been removed from the TF2 player model animation .MDL's, but can still be found in the Source Filmmaker animation .MDL's.

Right behind the bathrooms, there are two misplaced objects (a medium medkit and a large ammobox). 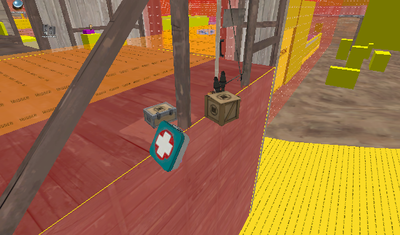 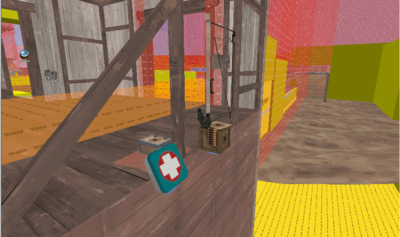 The bottom screenshot among the two photos was taken during development and was kept for the release. The following differences can be seen:

The German release of the game contains several changes to avoid getting a "keine Jugendfreigabe" ("adults only") rating. Blood particles for players are replaced with sparks to make it appear as if the player characters are all robots. Instead of the default player model gibs that would appear when the player gets exploded, the "silly" gibs from the TF2 Birthday event are used. There are also "bloodless" versions of the Axtinguisher and the Ubersaw. Other weapons were added over time that had blood on them, but bloodless versions were never made for this low-violence version. Much more recently, the ability to have the low-violence files removed from your account has been made available.

The French release of the game has the Spy's voice lines in English rather than French.

Due to anti-gambling laws in Belgium & the Netherlands, the ability to purchase keys and open crates is restricted entirely to players from those countries.