The NES version of Teenage Mutant Ninja Turtles: Tournament Fighters is notable for being the last Konami release for the 8-bit platform, as well as one of the few competitive fighting games released for the system during the genre's post-Street Fighter II boom. In this version, the Turtles are forbidden from using their weapons in Shredder's fighting tournament, forcing them to compete unarmed instead.

As with most of the games Konami published after 1990, this game features a copy-protection routine. When you press Start at the title screen, the game checks for the string "© konami" in VRAM. If the check fails, a flag is set, making the final enemy (Shredder) difficult - if not impossible - to beat.

If you do happen to defeat Shredder, the game will then loop back to the beginning of the fight. 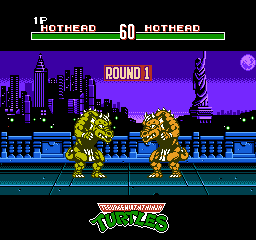 The NES version of Tournament Fighters allows mirror matches for every character except Hothead. There's a trick to circumvent this in "Vs. CPU" mode, though:

The CPU-controlled Hothead will have a different palette from yours, which suggests that the game was originally going to allow Hothead mirror matches. However, during the actual fight it will become obvious why it doesn't: due to their large sizes, the two Hotheads will cause a very large amount of sprite flickering.

Using the Game Genie code NNNEZPIE will allow Hothead vs. Hothead matches in "Vs. Player" and "Vs. CPU" modes, and NNOESYIE will allow all four players in "Tournament" mode to use Hotheads.