The first Teenage Mutant Ninja Turtles game for consoles, it is a ridiculous unbalanced single-player only platformer for the NES where you can switch between the four turtles at any time, with each one essentially acting as a glorified extra life. While the game sold remarkably well thanks to the massive popularity of the cartoons and toys at the time, it was quickly overshadowed by the 4-player arcade game released around the same period. Who knew people wanted to play a game about a group of four brothers with friends?

Unused animation frames for Rocksteady, Bebop and Fire Freak in what seems to be a flinching state, similar to Shredder's. These, however, go unused because none of these characters flinch from anything.

Graphics for a miniature Technodrome with two frames of animation. It is grouped with the graphics for the enemies that appear inside the Technodrome, possibly hinting that it might have been an enemy, but was eventually scrapped.

Grouped with the graphics for Area 3's boss and captive Splinter is a rough speech bubble reading "THANKS", but no character ever says this.

During the ending sequence, the game loads a heart symbol, which is only displayed in the Japanese ending text. The heart was slightly modified to look less stretched in the international releases, but the ending never uses it. 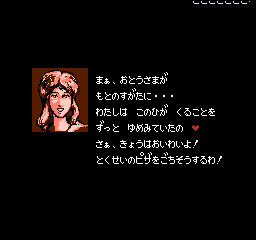 An unused frame for the van in Area 3. It never appears open in-game.

The game was localized for the Japanese market before any other form of TMNT media (such as the movie and the animated series) reached the country. As a result, Konami decided to rebrand the game under a completely different title, Geki Kame Ninja Den, which is composed of five kanji characters that literally translates to "Radical Turtle Ninja Legend". Subsequent games in the series released in Japan stuck to the franchise's actual English title.

In Europe, the game (and the franchise itself) is titled Teenage Mutant Hero Turtles, due to a law in the U.K. at the time that forbade the sales of products with the word "ninja" in their name to children.

The Japanese version of the game is substantially identical to the American and European releases, aside from the text. One particular liberty that the Japanese localization took was the fact that April addresses Splinter as otōsan (father)...not because of any local custom or formality, but simply because they decided to turn April into Splinter's daughter.

In the Japanese version, a sound effect plays when doors open in the cutscenes after areas 2 & 4, which is not heard in the American and European releases.

In the Japanese version, the colour of the logo in the character selection screen doesn't change when choosing another turtle.