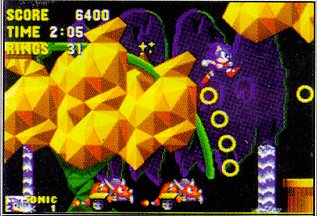 Released during the initial reveal of Sonic 2 were several mock-ups (advertised as screenshots) of stages; rather crucially, this includes the only known image of Sand Shower Zone, which was never implemented in any "real" build of the game.

Aside from that, several other differences can be seen in these early mockups (excluding reused assets from Sonic 1, such as the HUD). This image shows a different background compared to any prototype, although the small stalagmites can be found within the data of the Nick Arcade build, as is the Stego badnik (at the bottom).