From The Cutting Room Floor
< Template:FeaturedFile‎ | 01-17
Jump to navigation Jump to search 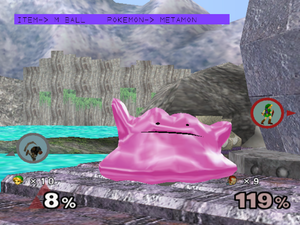 Using one of the Debug Menu's many tools, it's possible to choose which Pokémon will spawn from a Poké Ball. One of these Pokémon is Ditto, listed under its Japanese name of 'Metamon'. If a Poké Ball containing Ditto is thrown, it will pop out, briefly shout its Japanese name, and vanish. Ditto was presumably removed late in development, as it is mentioned in the official Melee strategy guide. Only one instance of Ditto can be on-screen at a time.

Ditto was later properly implemented 17 years later in Super Smash Bros. Ultimate: When summoned, it transforms into the fighter that summoned it and fights alongside them. This was likely intended to be its effect in Melee as well.