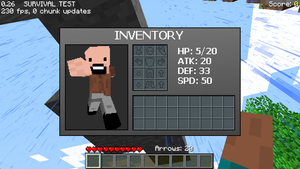 In a screenshot of what appears to be 0.26 SURVIVAL TEST, Notch made a mockup of an inventory screen; the armor slots seem to match up with Notch's unfinished game Legend of the Chambered, and although the "stats" section was implemented in some Indev builds, they served no function and were eventually removed along with 8 of the 12 armor slots.