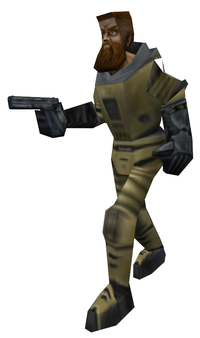 1998's Half-Life introduced the Black Mesa physicist Gordan Freeman, however his design was not always what was released in the final game.

Gordon Freeman's model is completely different in the September 1997 prototype. The prototype has a much bulkier HEV design with a dark yellow color instead of the final's, large gloves, and the word "Research" on his back. Gordon himself has a large beard and a flat top haircut. He has a Pistol glued to his right hand.

This version of Gordon Freeman was given the name "Ivan the Space Biker" by Valve.

Inside the prototype's model folder are models for a blue Gordon, a green Gordon, and a red Gordon. These models are possibly for multiplayer team modes. If so, the prototype does not have a yellow model for Gordon (game modes with four teams would usually have red, blue, green, and yellow teams, as seen in popular Quake mods). However, considering the dark yellow color the regular Gordon model has, it could be that the regular model would've been used for players on the yellow team. These colored models use an older model version than the version the majority of the prototype's models use.

This design appears in several early pre-release images, including one of the first images ever released by Valve.

Interestingly, this model was added to the model files in the Steam version of Half-Life for some reason. This model appears to be using the same model version the rest of the prototype's models use instead of the model format the final's models use, which made it impossible to view in a model viewer for a very long time. It also appears in Half-Life: Source's files, this time compiled for the same model version the rest of Source's models use.