From The Cutting Room Floor
< Template:FeaturedFile‎ | 01-31
Jump to navigation Jump to search 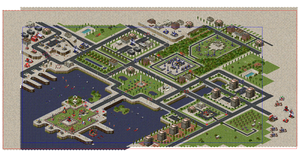 E3 2000 contained a demonstration of Command & Conquer: Red Alert 2, featuring a unique level for it.

This full map can still be found in the game files and viewed in the editor, showing the whole level and the oddities inside, such as the red team having some blue tech and the Allies still using flak cannons, which were then given to the Soviets.