From The Cutting Room Floor
< Template:FeaturedFile‎ | 02-08
Jump to navigation Jump to search 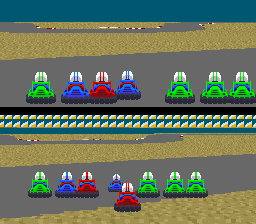 The 1991 Alpha is a very early build of Super Mario Kart that appears to be a general driving test.

The uncompiled code can be found in other.7z/NEWS.7z/テープリストア/NEWS_05/NEWS_05.tar/home/kimura/exp. The code files are dated from April 18 to July 25, 1991. Besides the code files, precompiled Intel-Hex files are also included in the same folder, called sfx-exp.hex and sfx-back.hex.

The earlier version (sfx-back.hex) dated June 10, 1991, is 15 days older than sfx-exp.hex, which is dated June 25. Besides a different main menu, there are also some small differences in-game:

• There is only one driver graphic loaded but with three different palettes.

• Characters (or actually the color palettes) cannot be selected. Player 1 will load the first driver palette and Player 2 the second one. Four of the other six "opponents" load the third palette, while two of them use the ones from the human players.