From The Cutting Room Floor
< Template:FeaturedFile‎ | 02-10
Jump to navigation Jump to search 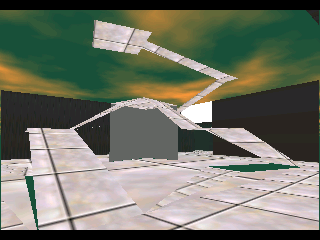 Citadel is a rough GoldenEye test level created during the early stages of multiplayer. It features a mostly symmetrical layout which spans three levels.

As can be seen, Citadel is incredibly rough. Its various features seem to have been cut directly out of its floors, leaving gaps of sky visible around them. Its geometry is often paper-thin, having absolutely no depth to it. Only the walls defining the general play area and the lower level are in anything resembling a finalized state. No attempt is made to make Citadel look like a real place — all of its rooms, even those on the lower level, are open to sky, and features which should be visible from other areas are not accounted for. The map shares textures with the Bunker level, but like its geometry, almost none of its texturing is in a finalized state. There are numerous missing textures, along with bizarre scales, rotations, and distortions for the textures that do exist.

Citadel was long thought to have been removed from the game, its only remnants being two text strings found alongside those of the other multiplayer levels. The level cannot be loaded normally in the North American or Japanese versions of the game due to it missing required files. Changes made to the level loading code in the PAL version mean it can be loaded, but the default start point at the (0, 0, 0) coordinate is outside the bounds of any room, so all that can be seen is its sky. Citadel's background was evidently discovered sometime in 2000, however this was believed to be a hoax at the time as only screenshots were provided.

It was not until 2004, when level emptier GameShark codes were hacked by Krijy, that Citadel could be seen in-game by the public at large. Using a code, it is possible to walk around the middle level of Citadel and view its rooms, since Cradle's slot always has the full level drawn regardless of which room Bond is in. It is not possible to play Citadel as a normal level using its files in the ROM, however, because its collision file uses an outdated format. In order to play Citadel, a new collision file had to be created by hand.