From The Cutting Room Floor
< Template:FeaturedFile‎ | 02-22
Jump to navigation Jump to search 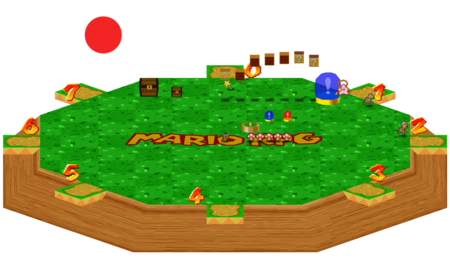 This room uses the background from Toad Town and contains a collection of various objects and pathways. The paths lead to the chapter indicated by the number, with 0 leading to the Prologue. The number textures themselves are from Super Mario 64. Upon actually entering each numbered pathway, the player ends up as follows:

Given that its room ID falls in the middle of the Toad Town rooms and that it leads to the chapters of the game, it is likely that this room was used during much of the game's development. In the center of the room is the name "MARIO RPG" spelled out in separate polygons, from when the game was still Super Mario RPG 2. Above the logo is Goompa and five Mushrooms. Beyond that are a few dummy switches for testing purposes.

The small treasure chest up in the corner is empty, while the bigger chest next to it contains the Super Hammer, but freezes before any sound is played or text is shown. By the large switch is Misstar, who flies away when Mario gets too close. Talking to the Koopa NPC sets Mario's max HP to 8 and gives him the Normal Hammer. Talking to Kolorado does the same, but sets the max HP to 11 instead. An NPC Star Rod sits in front of the Prologue exit, and it can even be talked to; however, as it has no associated dialogue, the game will immediately softlock. In front of the NPC Star Rod is a hidden block.