From The Cutting Room Floor
< Template:FeaturedFile‎ | 03-10
Jump to navigation Jump to search 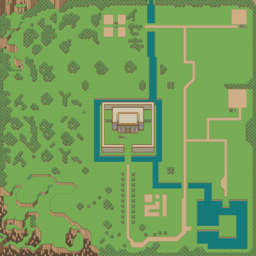 Credit to the Delda group for assembling this extremely early prototype overworld from the OSR-ST folder. It's notable that the developers created "Work in progress" signs to point out where some assets have yet to be added. Even at this early stage, facets of the final map are noticeable: a lake in the lower-right corner, Hyrule Castle situated in the center with a river running past it creating a moat, and the upper-left corner of the map being more heavily forested. It is uncertain if the cave systems were planned to lead anywhere at this point, but several caves in the top-left are unreachable unless cave systems were to connect to them from the bottom-left of the map.

It seems likely this overworld was abandoned when the graphical style was later changed to move closer to what we know as the final art style of the game, but facets of its design persist into the final map.

Interestingly, the word "ruins" (遺跡 iseki) in Katakana can be seen spelled with trees at the top-middle of the map.