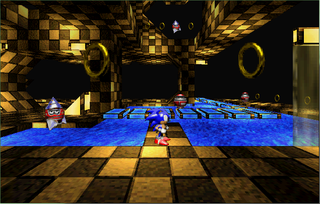 Sonic X-treme was intended to be the first 3D Sonic title, developed from concepts stretching back to the 32X era, but ran into a myriad of development problems and eventually scrapped, with a Sega Saturn port of Sonic 3D Blast being released instead. The cancellation of X-treme is widely considered a large reason for the Saturn's commercial failure outside Japan (Sonic wasn't as popular in his home country at the time, so the lack of a 3D Sonic game wasn't a big concern there).

A disc containing an early Saturn tech demo was discovered in 2005 and released to the public on July 17, 2007. In 2014, ASSEMblergames user Jollyroger found a set of data discs that belonged to the Point of View studio, which included early PC builds of Sonic X-treme, level editors, and an unseen prototype made by Point of View dated July 14, 1996.