From The Cutting Room Floor
< Template:FeaturedFile‎ | 03-29
Jump to navigation Jump to search 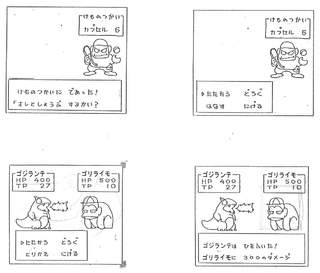 Pokémon Red and Green is how it all began, with what started out as one man's passion project later becoming the incredibly loved and renowned franchise that Pokémon is today. As such, the development phase of these games has a certain mythical quality to it, with some of the fabled conceptual material still shrouded in mystery.

Here, a "Beast Tamer" (likely a precursor to the Tamer class, known in Japanese as "Wild Animal Tamer") with six "capsules" sends out "No. 23 Godzillante". Interestingly, the menu when facing the Tamer has the option はなす (talk) instead of the POKEMON menu option. The fight itself is then shown, depicting two creatures with strong likenesses to Godzilla and King Kong, even being known as Godzillante and Gorillaimo. These are but mere placeholder designs created solely to showcase the early battle mechanic, which is evidenced by their kaiju basis. Interestingly enough, Gorillaimo's hat could be a reference to Ninten, the main character of Ape Inc.'s Mother. The battle screen itself is rather rudimentary, with the Pokémon being seen from the side rather than being front and back, the PPs (here known as Tps, likely standing for "Technical Points", similar to TMs) being shown, and the total damage of the used move being stated (with here Gorillaimo receiving 300 damage after Gozillante "breathes fire" on it).