From The Cutting Room Floor
< Template:FeaturedFile‎ | 04-01
Jump to navigation Jump to search 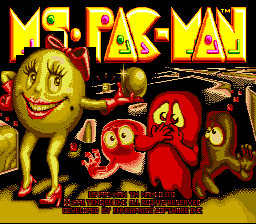 Originally developed by General Computer Corporation as an enhancement kit for Pac-Man called Crazy Otto, Ms. Pac-Man's huge success eventually made it an official part of the franchise (most notably the 1982-83 Pac-Man cartoon). Contrary to popular belief, Namco cleared Ms. Pac-Man for release and contributed to the character's design.

Shown on page 103 of the March 1991 issue of Electronic Gaming Monthly is this leggy, toothy, soul-devouring Ms. Pac-Man, which was thankfully redrawn before release. Interestingly, this old design managed to make its way into a prototype of the SNES port, due to it being based on an unreleased prototype of the Genesis version, before it too was ultimately updated to match the final Genesis version.

Judging by the holes in the logo around her head, she appears to have been hastily pasted in without the logo graphics being fixed up afterward, not that it really matters, as fortunately the developers ended up updating her design, so that it matched the one used in the Genesis version.