From The Cutting Room Floor
< Template:FeaturedFile‎ | 04-07
Jump to navigation Jump to search 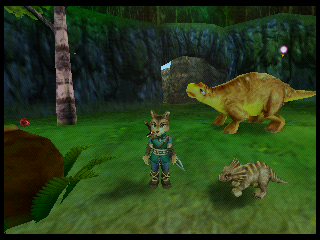 Star Fox Adventures originally started as a Nintendo 64 game called Dinosaur Planet. However, Miyamoto suggested that the game would be better as an entry in the Star Fox series and the game was heavily reworked for that. This, along with a platform change and an impending buyout of Rare, caused significant troubles for the reworked game.

An early ROM made just before the development team moved to the GameCube was released, made before drastic plot changes were made. However, Fox has already replaced Sabre and voice clips are slowly being adjusted as such. Sabre's gameplay and cutscene models are still present in this build, but they each have some issues. Sabre's gameplay model (which is used as a placeholder for Fox's SharpClaw disguise) uses the wrong texture on the back of his head - a similar-looking texture intended for the ShadowHunter dinosaurs' legs is assigned by mistake, but his proper texture is present in the ROM.