From The Cutting Room Floor
< Template:FeaturedFile‎ | 05-04
Jump to navigation Jump to search 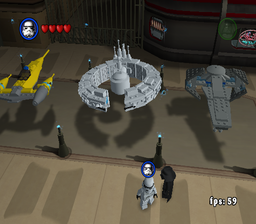 Shown here is a mini-kit set intended for Anakin’s Flight, a level that is completely removed in the final build. It is playable in a prototype dated from January 10, 2005, albeit lacking polish and unfinished cutscenes. The only way to see this mini-kit is using the debug menu in that prototype, as no LEGO canisters are dropped during the level. This level would appear in LEGO Star Wars: The Complete Saga, albeit implemented very differently.