From The Cutting Room Floor
< Template:FeaturedFile‎ | 05-07
Jump to navigation Jump to search 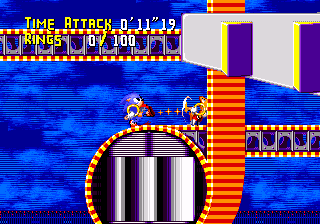 Considered the calm before the storm right before Sonic X-treme's development, Knuckles' Chaotix is an "anything goes" game on the 32X consisting of bizarrely-constructed levels, claw machines, occasional 3D, a giant dose of the Memphis aesthetic, and a plot involving Knuckles being literally shackled to various people with magic rings while trying to stop Eggman/Robotnik from trying to induce disaster with his Chaos Rings.

Pictured is an early build of the game that ran a regular Genesis, then called Sonic Crackers. While the core mechanic of two characters tethered together is present, it does not share much with the final game aside from some music tracks. Neither Tails or Sonic are in the final game either, aside from a small cameo in the good ending. Despite this, a prototype of a Yuu Yuu Hakusho fighting game does contain evidence that development on the Genesis continued further than the available build.