From The Cutting Room Floor
< Template:FeaturedFile‎ | 05-21
Jump to navigation Jump to search 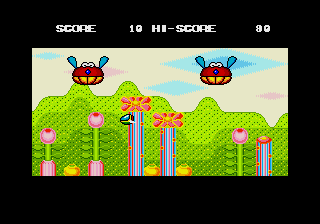 Arnold Palmer Tournament Golf is a golf game released early in the Genesis' life. It's notable for starring a golfer so famous that a beverage is named after him... unless you live in Japan, where a respectable Japanese golfer (Naomichi Ozaki) is featured instead.

Pictured is a playable Easter egg based on Fantasy Zone that can be accessed by hitting the ball 100 times on a single hole and entering a code sequence similar to the Konami Code. This is not present in the Japanese version, which instead just shows a crudely-drawn screen.