From The Cutting Room Floor
< Template:FeaturedFile‎ | 06-01
Jump to navigation Jump to search 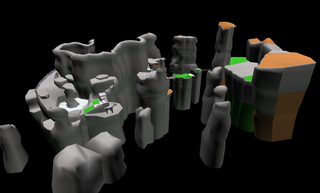 Sonic Adventure is the first true 3D Sonic game, with people either saying this killed the series or resurrected it. It's still considered a good game, despite it having aged pretty badly in many ways (like the in-game cutscenes and Big's fishing sequences).

Pictured is an early version of Windy Valley extracted from the AutoDemo's files, which lacks textures. This would be seen in the game's official unveiling, but the level ended up completely reworked. This version of Windy Valley is very large and open in comparison to its more linear counterpart from the final game. While the geometry for Act 1 seems to follow the same rough path as the final version, Act 3 is entirely different.

The AutoDemo predates the final build by months, yet contains numerous assets that would be removed from the final game.