From The Cutting Room Floor
< Template:FeaturedFile‎ | 06-09
Jump to navigation Jump to search 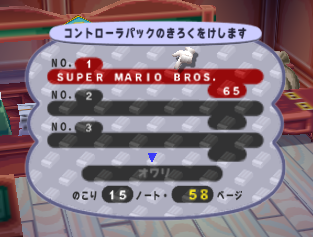 Doubutsu no Mori is the first entry in the Animal Crossing series, released on the Nintendo 64 in Japan only. An upgraded version was released internationally on the GameCube as Animal Crossing.

It seems the game was once meant to detect NES ROMs through the Controller Pak and manage the data through that. However, as Nintendo never officially incorporated any games into a Memory Pak, this never gets seen. While this was removed from the GameCube release, functions to read NES games off a Memory Card can be found there.