From The Cutting Room Floor
< Template:FeaturedFile‎ | 07-22
Jump to navigation Jump to search 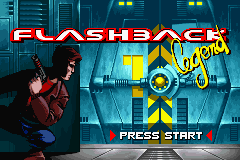 Flashback Legend is the unreleased sequel to Fade To Black, itself the sequel to Flashback: The Quest for Identity. The Morphs are at it again, and Conrad is the only one who can stop them...by following orders without question, searching cards and cells, and sometimes even directly charging into enemies.

The game was shelved after the developers went bankrupt. The available prototype, dated June 21, 2002, is from early in development. For instance, the title screen is normally inaccessible and several bits of story text can be found in the game's ROM unused.