From The Cutting Room Floor
< Template:FeaturedFile‎ | 08-01
Jump to navigation Jump to search 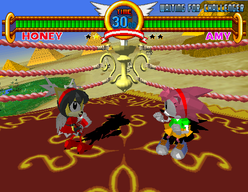 As an acknowledgement of this, it seems that Candy/Honey was intended to be a playable character, albeit in cat form. Using cheat codes, one can access her in a mostly complete state, though some issues can be seen such as her eyes drifting in weird directions. The XBLA and PSN versions would eventually add her as a secret playable character (move the cursor over Amy and press Start, which also unlocks an achievement/trophy).