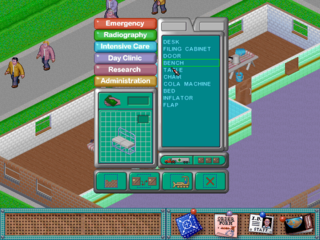 Theme Hospital is a simulation game in which players build and run a hospital curing patients of comical diseases. There was difficulty in basing the game on real hospitals because the developers knew that theme parks are naturally much more colourful and fun than hospitals. After hospital visits, this idea was dropped and the game shifted to using comical ailments instead.

A rolling demo of the game from 1995 was included on a Christmas disc distributed by Bullfrog themselves. While this version of the game is normally not playable, hex edits can be made to the executable to allow some interactivity. There are number of UI ideas shown here that are not present in the final game, such as a pin-up UI that is incomplete.