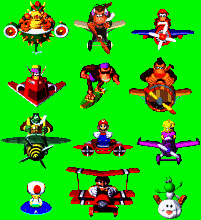 Banjo-Pilot is a racing game in the Banjo-Kazooie series, exclusive to the Game Boy Advance, that was not only the bear and bird's final appearance on a Nintendo system for more than 14 years, but was also once a sequel to Diddy Kong Racing, entitled Diddy Kong Pilot.

On November 2011 and January 2013 each, one build was released from two separate points of the game's Diddy days. The one from 2013 dates September 7th 2001, being closer to the game's first public showings, with a new Kong, 60fps, many moments of multiplayer mayhem, and even tilt controls. Meanwhile, the one from 2011, dated February 19th 2003, is much more closer to Banjo-Pilot, just still with the DK license.

Pictured is the game's character roster as it existed circa Spaceworld 2000; all of the Mario characters had been dropped by E3 (as was Funky Kong for a while).