From The Cutting Room Floor
< Template:FeaturedFile‎ | 09-02
Jump to navigation Jump to search 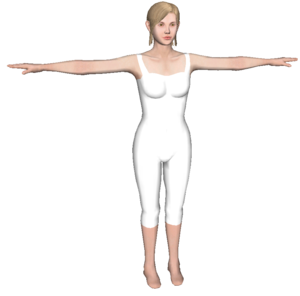 Wii Fit is an exercise game that uses the Wii Balance Board for a bunch of different minigames, as well as doing Yoga with a very creepy woman who somehow became a fighter in the Super Smash Bros. series. The game was a huge success, and even spawned a sequel.

Pictured here is a model of a more realistic female trainer with textureless, solid-color clothes. Based on the structure of the model and the full version of her body texture, it is apparent that the model was originally nude and the developers simply retextured parts of her body to create her clothing. The color of her clothes roughly match that of the normal trainer in the original Wii Fit. (They appear white in the image due to a rendering error.)