From The Cutting Room Floor
< Template:FeaturedFile‎ | 09-04
Jump to navigation Jump to search 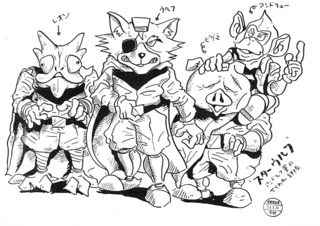 Star Fox 2 is the once-cancelled sequel to Star Fox, originally scheduled for release in early 1996. However, the imminent release of the Nintendo 64 lead to Nintendo scrapping the title. Thus, prototypes floated around for several years until it was suddenly announced to be released as part of the SNES Classic Edition.

Pictured here is the Star Wolf roster. What's unusual about this piece of concept art is the presence of Andrew Oikonny, who would be replaced by Algy for this game, yet would make a proper appearance in Star Fox 64 anyway.