From The Cutting Room Floor
< Template:FeaturedFile‎ | 10-11
Jump to navigation Jump to search 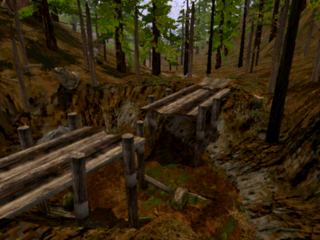 Jurassic Park: Trespasser was an ambitious game with plenty of unique features for its time, among them a physics engine, realistic water, a complex environment with lots of trees, and an almost nonexistent character model that has only one arm that stretches out in an awkward fashion. Unfortunately, the game had a rushed development cycle and got released in a broken state that received negative reviews and sold poorly. Still, it has a dedicated fanbase.

Pictured here is a loading screen for the cut level, Pine Valley, which managed to survive to the final version. Pine Valley is perhaps the most famous scrapped level from Trespasser, probably because of how far into production it made it before being scrapped. It's also because of the fact a stripped down version of Pine Valley was used for the Trespasser demo. The main reason for Pine Valley's removal was because the puzzles were too buggy and Dreamworks Interactive had little time to fix them before the upcoming deadline.