From The Cutting Room Floor
< Template:FeaturedFile‎ | 10-16
Jump to navigation Jump to search 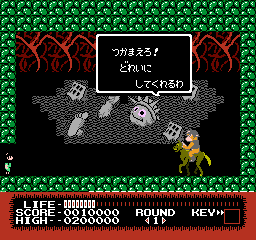 Monster Party follows the story of a young boy named Mark, who is sent to a dark world by an alien named Bert. It's somewhat infamous for the amount of horror material for an NES game, which has puzzled American gamers as Nintendo was known for its harsh content guidelines for its time.

Pictured here is a screenshot from the equally infamous unreleased Japanese version, which contains numerous movie and horror icon parodies and references. In this picture here is a parody of the 1968 film, Planet of the Apes, complete with an ape riding horseback and a very cartoony version of the famous Statue of Liberty scene in the background.