From The Cutting Room Floor
< Template:FeaturedFile‎ | 10-25
Jump to navigation Jump to search 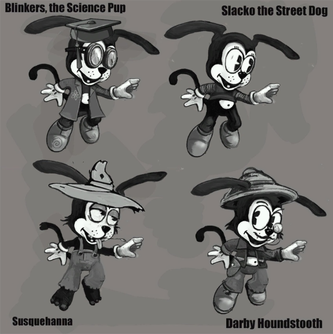 Ghostbusters: The Video Game reunites the main cast for a new story written in part by the writers of the two movies. Set in 1991 (about two years after Ghostbusters II), you play a rookie who is hired by the Ghostbusters mainly to be a guinea pig for new tech they've created, facing off against foes old and new.

A whole level based on the Macy's Thanksgiving Day Parade was cut, but there's a lot of leftovers. For instance, this art of Blinkers and friends, who are only seen briefly in a cutscene. This would have been unlocked had the level been completed by the player, but the art remains unused.