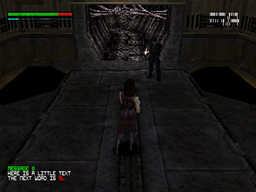 Alien Resurrection started development in 1996 as an overhead shooter inspired by the then-recent Loaded and announced for a late-1997 release for PlayStation, Saturn, and Windows. After a year of work, Argonaut decided to abandon the Loaded approach and the game became a third-person action-adventure in the vein of Tomb Raider. Following the decision, a portion of the team left the project, frustrated that a year's worth of work was scrapped. Having struggled with the game engine, the third and final change to a first-person shooter came in Fall 1999.

Pictured here an early prototype of game running in third person. To date, a prototype of the game as an overhead shooter has yet to surface, but several for both the first and third person shooter gameplay styles were made available.