From The Cutting Room Floor
< Template:FeaturedFile‎ | 11-11
Jump to navigation Jump to search 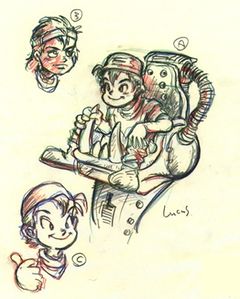 A very early design of Lucas, where three design options were chosen for him for varying ages throughout the game. Design A, which sported the poncho was picked for the eventual Spaceworld 1996 reveal, due to a character resembling that eventually appearing in the footage.

Lucas would change many times throughout development, as stated by Benimaru Itoh - “The protagonist we’ve had since the beginning has changed appearance many times. His character seemed to change every day. Lucas really came to life as a response to the world around him.”

The reason why his early "poncho" design was scrapped was due to series creator Shigesato Itoi disliking the design, which Itoh also reflected upon: “The previous Lucas looked a lot like me…so all the staff shouted, “No!” Especially Shigesato Itoi in particular who shouted, “No!” So he requested I redesign the main character to something more straightforward. Thus, I completely redesigned him.”

One thing Itoi found really important in designing the protagonist was visually displaying a method in which the characters haul all their items. This is the reason why Lucas's final N64 design wears a fanny pack.