From The Cutting Room Floor
< Template:FeaturedFile‎ | 11-25
Jump to navigation Jump to search 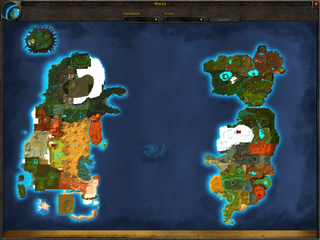 0.5.3 is World of Warcraft's earliest known leaked alpha. Dated almost an entire year before the game's release date, it was obviously a work in progress. Though it's extremely buggy and prone to crashing, it can be played with use of an emulator. Now, thanks to the nature of World of Warcraft, that being quests, NPCs, and most other MMORPG features are absent; for the most part, the client is a bare-bones sandbox.

Every zone has at least some minor differences compared to the final release. While some zones are nearly finished, a few, notably Winterspring, haven't even been started on. Some, such as the Island of Doctor Lapidis, don't even exist in the final release at all! It is worth noting that the Eastern Kingdoms (named "Azeroth" in this build) has had more work done on it than Kalimdor, especially the zones surrounding Elwynn Forest.