From The Cutting Room Floor
< Template:FeaturedFile‎ | 12-15
Jump to navigation Jump to search 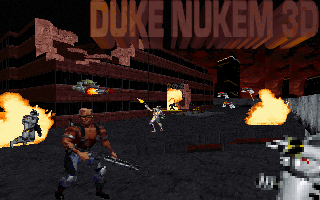 LameDuke is an early prototype of Duke Nukem 3D that was compiled on December 30th, 1994 (though the internal date says it was compiled on January 3rd, 1995 and some levels were last modified on the afternoon of January 1st, 1995), released by 3D Realms in 1997 to celebrate the first anniversary of Duke 3D's shareware release. This build is very different in tone and style, acting closer to a direct continuation of Duke Nukem 2 than the final game. For example, nearly everything is completely different here.

Despite its age, it's clear that a lot of work and time was put into this prototype.

One of the more interesting parts of this prototype is that it appears to contain two different visions for Duke Nukem 3D in it. The first one has a primitive, gray city filled with simple architecture and an underwater base the player must infiltrate, while the second, shown in Episodes 1 and 4, is a prototype for the style that the final game's city levels would use.