Another terrible game based on the Terminator series.

Several Software Creations games (including this, Sky Shark, Target: Renegade, Magic Johnson's Fast Break, Pictionary, and Treasure Master) had their empty space padded with copyright/credits text, rather than 00 or FF as most other games did.

Terminator 2 contains the following text in two encodings, standard ASCII and 00-based, interleaved:

Note that there are no actual line feed symbols in the text; each line is a fixed length, padded with spaces.

It seems that Software Creations intended to release a more complete version of Terminator 2, as seen in the video. The only difference appears to be an added high score table during the attract mode, also seen in the prototype version, but more complete. 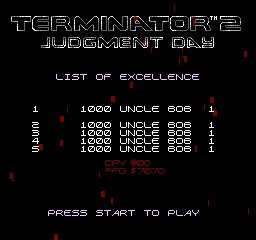 This screen still exists in the released versions of the game, and can be re-enabled in the European version with Game Genie code XVKZLYAV (it will appear between the game over and continue screens, and after the game's ending). Unfortunately, it's only for show, as most of the code needed to actually make it work is either incomplete or doesn't exist, including the actual name entry screen. 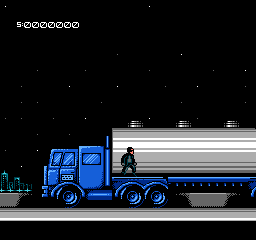 Code to display your score in place of the health bar still exists in the final version, and can be enabled by setting RAM address $72A to 01. 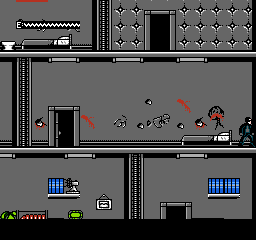 The prototype featured grafitti on the walls of some rooms in the hospital level. Even though they aren't seen in the final game, the graphics are still present.

There is an unused jingle in the ROM. Its downbeat nature suggests that it was meant to be used for death and/or Game Over, both of which just continue playing the main BGM.