Terranigma is an action RPG that's part of the same "series" as Soul Blazer and Illusion of Gaia. Famous for being a really good game. Even more famous for being released in Europe, but not America.

There are a number of items in the game which can only be obtained by hacking. For instance, use Pro Action Replay (PAR) code 7F8000?? (where "??" is one of the numbers listed below) to put that item in the first slot of your inventory. None of them have any effect in-game, however.

There's much more detail for the final boss's background than what the game allows you to see. The most notable details are the unseen cones, though the top cone is graphically unfinished. There are also some stars near the heads and a column of some odd graphics at the top. 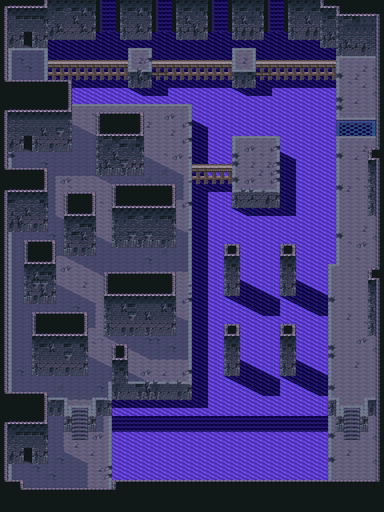 Very little of the right portion of Dragoon Castle's second floor can be seen, and the game prevents you from exploring it due to an event kicking you out partway through the escape route at the top. This same event subsequently makes Dragoon Castle inaccessible for the remainder of the game. The path doesn't look complete, as there is a staircase near the bottom that leads to nothing.

Two strings can be found in the ROM that refer to a debug menu and a sound test. They can be accessed with some text repointing, and some of them are still functional. Each version, even the German, Spanish, and French versions, still has these strings exist (at a different location in the game, though) with a different translation.

Beginning at 0x8DC9C (in the English version):

Starting at 0x8DE62 are strings for a sound test. Exclusive to the Japanese ROM is an extensive list with names for all tracks in the game matching the official soundtrack listing. While this could hint that players were meant to see it, it's unused in all versions.

Various text for warping around. "Dev. Rm" actually refers to the Quintet building.

You'll be presented with three options:

There are more options to select on the menu below and to the right of the existing ones, but most softlock the game or have you regain control with the textbox still on-screen. The only one that doesn't cause an issue is the option to the right of Ending, which acts identical to Flight scene.

There's a sound test in the game that can be activated with the following Pro Action Replay (PAR) codes (Japanese version):

Once the code is entered, talk to your mom in Crysta to start up the sound test. 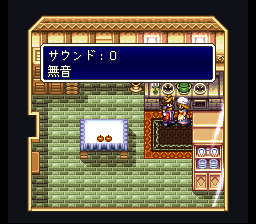 Known as Tenchi Souzou (天地創造, lit. "Creation of Heaven and Earth") in Japan. The Japanese version features a more elaborate animation sequence where each kanji of the title appears one by one until they finally form the full title of the game. Since the English title sequence is a bit shorter, the music goes slightly out of sync with the visuals in the following cutscenes and demo. Also, besides the updated copyright, the font has a different color palette.

The localized versions infamously made almost no effort to reprogram the text display routines to accommodate English text. Besides ｐｏｏｒｌｙ ｓｐａｃｅｄ ｔｅｘｔ, most message boxes in the game were expanded from three to four lines to fit all the text, causing sprite limitation problems on some screens like the special move explanations. Additionally, some messages were segmented over two or more parts, causing some automatically scrolling text in the Japanese version to have waits for player input in the translated versions. Little to no effort was made to adjust the text speed, causing significant text desynch in some events like the Kagome-Kagome doll song in Sylvain Castle's basement. Finally, some animation for message boxes in menus was removed to accommodate larger text boxes.

The Nintendo translators made very few attempts to censor the game, but some content was accidentally cut or mistranslated because of length limitations. For example, the Blood Armor (血のヨロイ) in the Grand Mosuku town (renamed Mosque in the English versions) which sold for 6660 Gold and offered a +44 DEF bonus, was translated "RedArmr", even though the description made it mostly intact ("血められた ヨロイです。" to "Dully coated with washes of blood.")

After saving the guy from the ghost in Neotokio, you can play a quiz with a guy in the General Affairs Division inside the Quintet Building in the Japanese version. If you answer all 18 questions correctly, you get a Magirock as a reward. In all European versions, this minigame was removed and its associated Magirock rendered unobtainable.

Despite being made inaccessible in the European versions, the quiz can still be found translated but unused within the French, Spanish, and German ROMs. With some creative hacking, it can be made accessible and completely functional again in-game, though the text overflows frequently from the message box hinting this was never playtested properly. The English version completely removed the text but still has a text string, "Actraiser", in the text data compression routine, and that word is only ever used in the quiz.

Due to Slapstick (also known as Robotrek in the US) never being released in Europe despite plans by Quintet to do so, the French and German versions tried to replace some questions related to that game with Nintendo-themed questions. The Spanish translation is mostly accurate to the Japanese questions, aside from using the US name for the game, "Robotrek", similarly to how a Terranigma namedrop ("Tenchi Suzou" in the Japanese dialogue) by another Quintet employee was translated using the American name, as "Illusion of Gaia 2", instead of the established European name Illusion of Time, in the English version (the French version used Terranigma, and the Spanish version used "Illusion of Time 2"). This makes sense considering Nintendo of America staff worked on the translation.

All grammatical mistakes present in the original European scripts were kept as they were here. Words between brackets are the ones where the text compression index wasn't verified yet. Drastic deviations from the Japanese text were marked in bold. 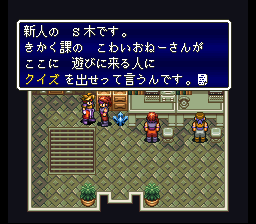 If you try to take the Magirock:

If you talk to him:

If you say no:

After you have taken the reward: