Originally released in the US as Test Drive, it sought to be a fresh reboot of the series featuring a completely reworked game engine and for the first time in the series - story mode.

By either editing the save game or using codes, an unused version of the Cuda can be unlocked in the garage. Featuring Challenger T/A-inspired hood scoop, instead of shaker hood scoop, this version of the model was originally intended to be Clark's Cuda. However, the developers decided to use only the normal Cuda, leaving this model fully functional in the game: 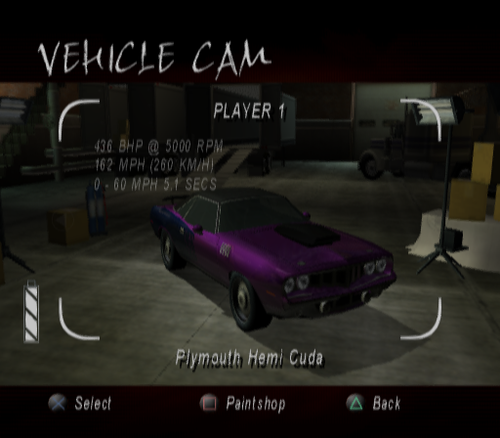 Hamada's Supra can also be unlocked using the same method.

As the game was released under a different name in Europe for the PlayStation 2 and Xbox, the logos have been changed from Test Drive to TD Overdrive:

The header of the data .bin files for the PS2 version has the following credit (note the typo!):

The same message would later appear in L.A. Rush.

Also found in a .txt file in the game's files for the PS2 version is a leftover log file from an internal tool named pap2psx2 (Pitbull Art Pictures to PlayStation 2.v2.9 - Movie Support+!), which was used for converting textures:

The IP address displayed in Underground mode's "in-car unit", 213.120.252.194, was Pitbull Syndicate's mail and web server used for their site at the time.