From The Cutting Room Floor
Jump to navigation Jump to search
This page contains changes which are not marked for translation.
Other languages:
English • ‎español • ‎français • ‎italiano • ‎polski • ‎русский • ‎日本語 • ‎한국어

Nintendo's NES Tetris is the system's third port of the famous puzzle game created by Alexey Pajitnov, following those of Bullet-Proof Software and Tengen, and by far the most well-known of the three.

An airplane and helicopter can be found among the ending sprites. These aren't used in any of the endings of the game.

They do have valid sprite indices, and can be made to appear via hacking. To see the airplane, use Game Genie code AUYZLY (US version) or ALAXSA (European version) and finish a Level 0 B-Type game. To see the helicopter, use the code TOYZLY (US version) or TPAXSA (European version) instead. The helicopter skids are cut off in-game due to programmer error and are thus unused, but the main and tail rotors are nicely animated.

The first track in the NSF is unused, and was presumably intended for the title screen (which is normally silent). It can be heard by setting RAM address $6F5 to 01 at any time. Alternately, use Game Genie code PEIAZI to replace music type 1 with this track. 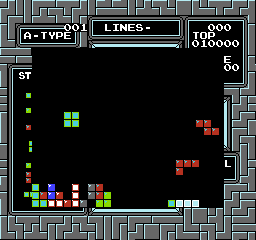 Setting RAM address $BE to 02 (or using Game Genie code ZALAPP) activates an unfinished two-player competitive mode, a rather surprising omission that was present in Tengen's rendition. The basic rules are in place and garbage attacks are fully implemented, but there are numerous issues:

The game has an unused subroutine that records the player's input for use in the gameplay demo. This subroutine is activated when $00D0 in RAM is set to $FF. However, since the game tries to write the captured inputs directly to ROM ($DD00-$DEFF), it doesn't work correctly on actual NES hardware or unmodified emulators.

The European version has cheats not present in the US version. To activate the cheats, hold Select while a piece is landing. In A-Type, you get 10,000 points. In B-Type, you get "Success" and instantly finish the level.